This week I did another Windows 10 install and I was again struck by the erosion of privacy built into the system.  At this point it seems most people have given up on the idea of privacy (or simply don’t care) – but for those of us who do, you may want to keep reading.

So with Windows 10, when you go through the setup (either when buying a new Windows 10 computer, or when upgrading from a previous version), there’s a screen that looks like this: 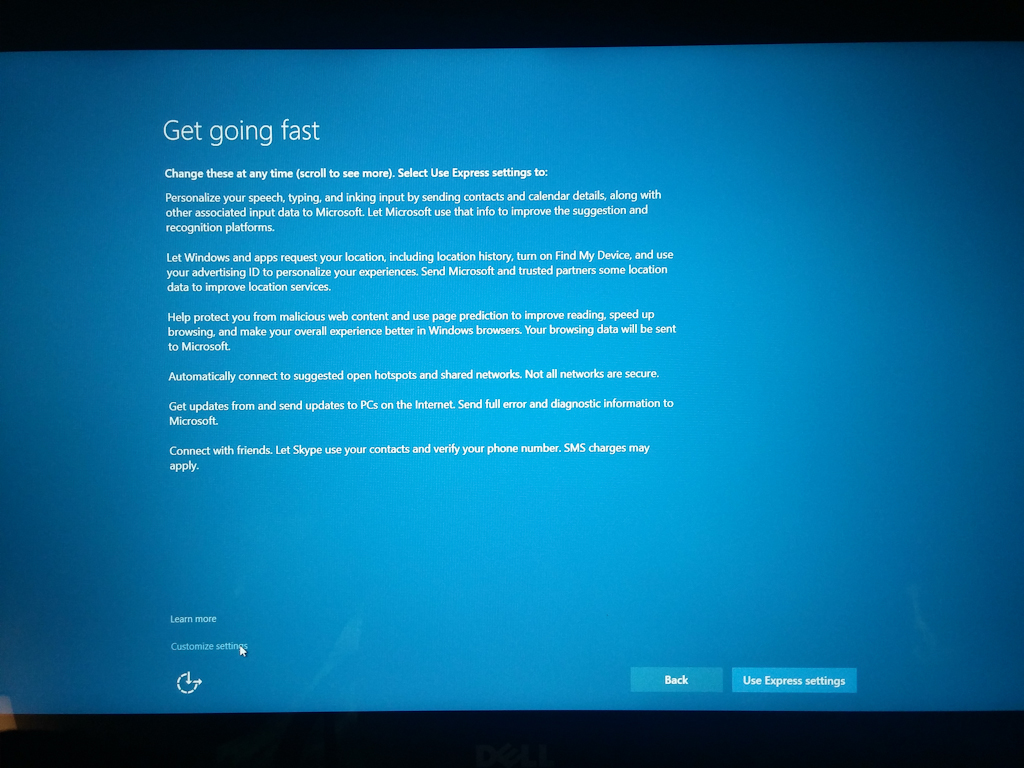 If instead, you click the tiny little “Customize settings” option in the lower left, you’re taken to this screen: 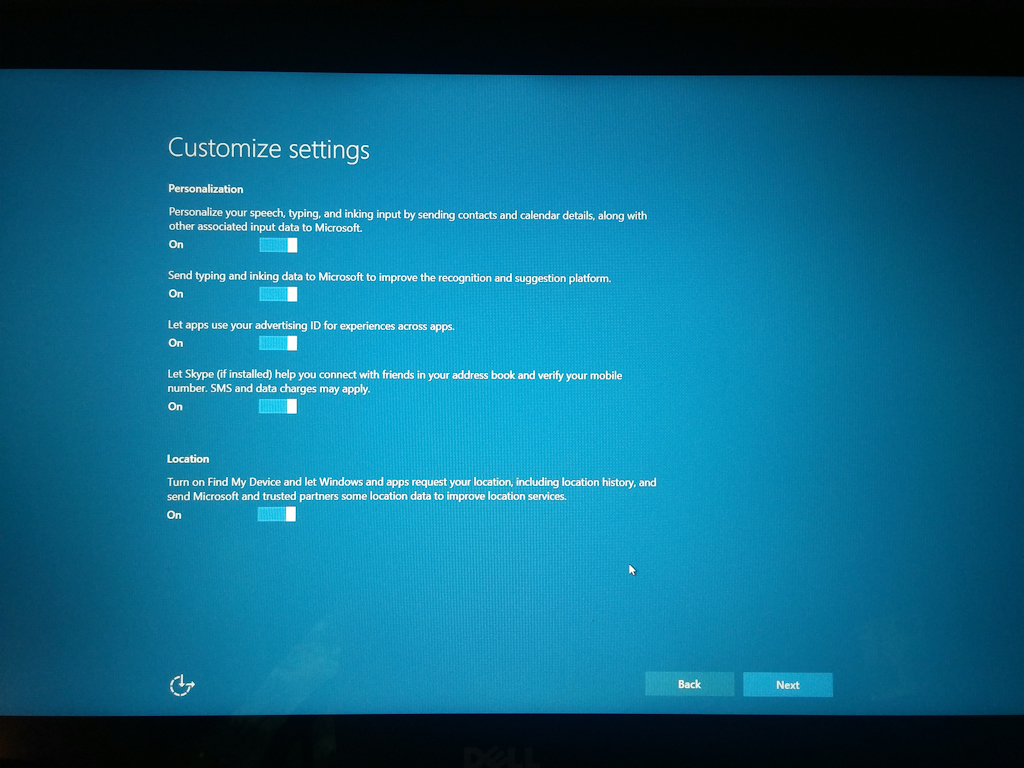 Ok, so by default – if you had clicked that “Use Express Settings” button, all of what you see here would be set as-is.  Take a look at this for a minute.

The first item basically gives Microsoft access to all of your contact and appointment details.  Oh, and notice that “speech input” is on there – this means that if you use Microsoft’s new Cortana feature for voice recognition, your voice can (and will) be recorded and sent to Microsoft.  In other words, your speech patterns are now being cataloged and saved.

The second item gives Microsoft access to anything you type or write (when using a tablet for instance).  So your personal handwriting can now be recognized and stored too.

The fourth item is now digging into your contacts list, including on your phone,to mine yet more information.

And last but not least, the fifth item allows your device to send location information back to Microsoft, including your current location and everywhere you’ve been.  So if you bring a laptop or tablet with you, everywhere you go can be tracked and recorded.  By the way, your phone is already doing this.

Ok, so I don’t want to be an alarmist here – clearly there are some useful reasons why these features exist.  And I’m not saying that by installing Windows 10 you’re inherently being spied on, but actually, to some extent, you are.

I guess it just boils down to what you’re willing to give up for convenience sake.  Sure, it might be convenient to get advertisements for a the prescription drugs you need for your particular ailment because “they” know who your doctor is, how often you go to see him or her, where they’re located, and anything else you happen to do online, or, increasingly, in the physical world.  And yeah, maybe it makes things easier when you can talk to your tablet and ask it questions, but do you want Microsoft to have your speech patterns on file?

And let me be clear here – and this is the important part – this data doesn’t staywith Microsoft.  Indeed, Microsoft has plainly admitted that they share information not only with other private sector companies, but with multiple branches of the government as well.  In fact, several years back it came out that any Skype call can be monitored and recorded by the government:  https://www.cnet.com/news/nsa-docs-boast-now-we-can-wiretap-skype-video-calls/

So yeah, your personal video calls can be recorded and archived for whatever reason, to be data-mined down the road for any purpose.

So where does it end?

One thing I find interesting is that many years ago, I would occasionally work on a laptop for someone who had put tape over the built-in webcam.  At the time I thought they were perhaps a bit nutty.  Now, I see as many tape-covered cameras as not.  I’m dead serious.  And I don’t think it’s particularly funny.  It’s as if we’ve all just kind of acknowledged that the idea of remotely turning on your camera without your knowledge is a very real possibility, and we’ll just put tape over the problem – literally and figuratively.

The fact is – unauthorized remote access into our computers is pretty much a given.  Both Intel and Microsoft have acknowledged that the backdoors exist.  If they want in, they’re in.

So what does this mean for the future of privacy?

As a society we’ve all seemingly agreed to give up privacy in favor of convenience and safety.  There’s practically a camera on every street corner now.  Not to mention that we’ve essentially handed over our privacy rights to companies like Facebook by voluntarily publicizing every aspect of our lives.  So on that level, we have no one to blame but ourselves.

But the fact remains that as technology progresses we inherently give up privacy.  With our whole lives being digitized, it’s really just a matter of who has access at this point.  Of course some people will say “if you have nothing to hide, you have nothing to fear” – but is that really true?  And is that the world we want to live in?  I see a striking resemblance to Orwell’s 1984.

So I think it really boils down to vigilance.  Yes, we’re going to have to give up some of our privacy to get the conveniences that modern society has afforded us.  But we must always be vigilant, and we must always ask “why?”  Why does this information need to be collected?  Or does it?  Why am I being asked to give away my rights?  And is it worth it?

I don’t think there’s a right or wrong answer here.  It’s not a black or white issue.  And this is an area where we, as complacent Americans, tend to fall short – we’re always looking for the answer, the side to take, as if it were that simple.  Just look at our political system – pick from the red team or the blue team.  What a joke.  But real life isn’t like that, and real solutions generally don’t come from that type of thinking.

We’re all just trusting that “if we have nothing to hide, we have nothing to fear”.  But what happens when that trust is no longer justified?  What happens if, God forbid, our information is used against us?  Can we really trust that this can’t or won’t happen?  Given the historical record of our government and the corporations now running this world, I think not.

Trust is good.  Blind trust can be dangerous.

And yeah, I put tape over my webcam too.  And you better believe I turn off all those Windows 10 options.

But that’s just me…